Boy, that was a hard one but also very challenging task.

In this mission we're given a PCAP file and an information that we've intercepted a remote GDB session.

When I saw that info I've immediately got a flashback from the Pwnium CTF where a similar task was given. I've even started writing a parser for that but probably due to lack of time haven't finished much.

So we've got a PCAP file but what's next? The obvious of course is to extract the data. The nice thing here is that we can do the 'Follow TCP stream' in Wireshark and we will get the whole GDB remote session data. 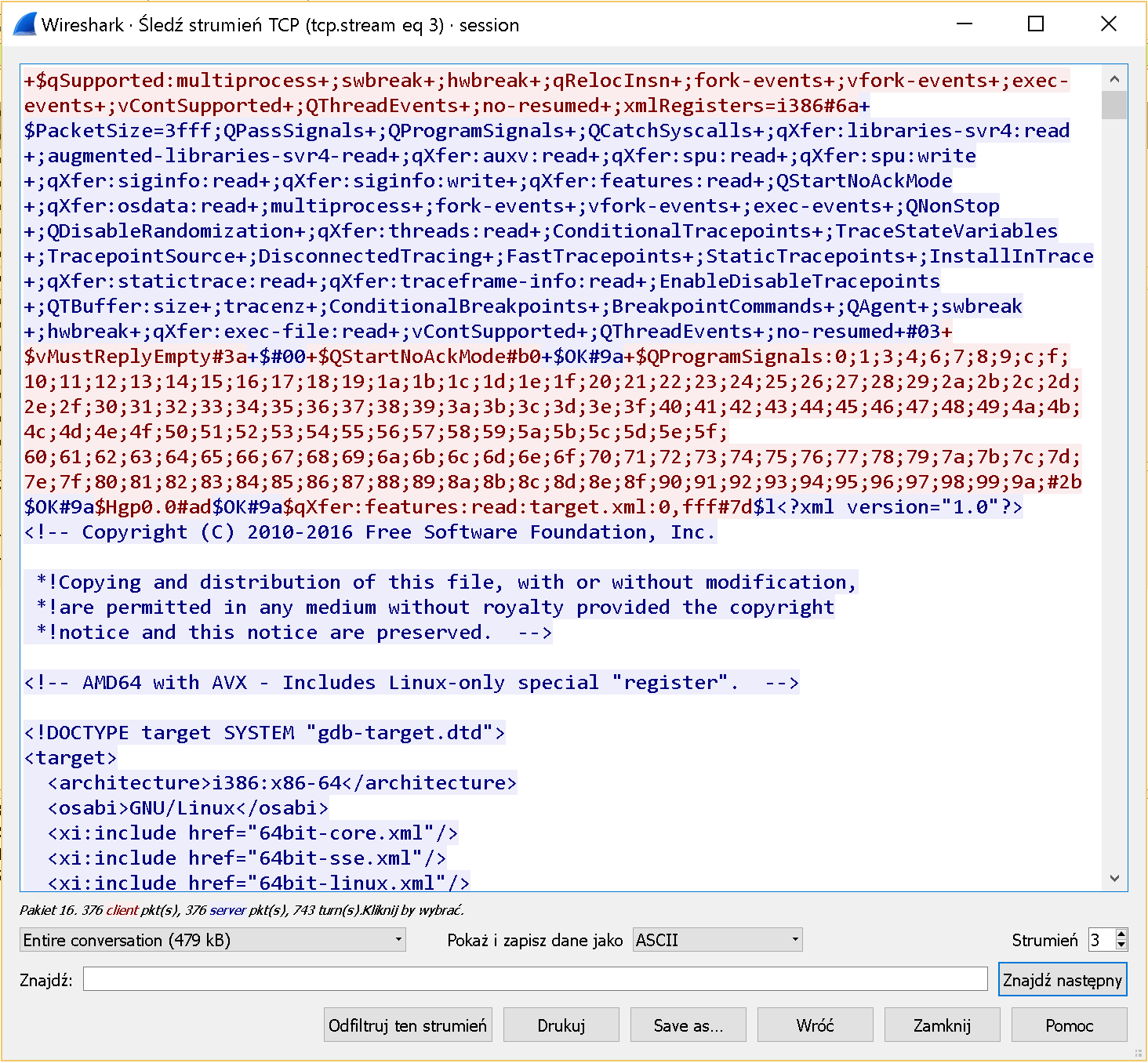 So we save that data to a file and we can exchange Wireshark to python.

If you don't know (or were not aware about) GDB remote protocol just check the docs. For the start it's good to read Overview & Packets sections. The most important lesson is that it's a textual protocol where packets are generally divided with $. Also an important info is that data can be RLE encoded.

We can start writing the parser[1]. My gut feeling told me that we should focus on m command - reading memory so I've focused on that but in fact we needed a bit more that that.

After spending like 2h on writing the parser I've got something more or less working (don't judge the code - it's crappy I know). What we get from running it is a log that could be more or less analysed by a human.

Reading it reveals some interesting data. We can see maps (there's a read operation on /proc/<pid>/maps), data reads with the actual data content (dumping the memory) and some paths (part of the environment variables) and much more.

That was a great source of intel. Our target is probably a.out and it was mapped @0x555555554000, but in our output we also saw lines like this one.
Reading memory at: 0x555555554000 of 0x40 bytes and the returning data even starts with ELF. Does it mean that we have the whole binary in the log and we should search for the flag there? Let's add an "extractor" to our script and save the binary data to a file. Next run and we've got a file but running a file on it gives us this

Error? Hmm. Did we missed something out? Checking the content of the file we see that a lot of data is missing (0s). Some parts of it are present though.

After a bit of more checking the log, it looks there's no more data for our binary. Let's work with what we have.

Before we go further one note here. It looks like it took like minutes to get to the conclusion that we should move to analyse the binary but in fact I think it took around 3h. A lot of extracting data (like libs - yup!) and checking my parser to be sure that there's no issue with extracting the content and/or decoding the strings.

Since I don't own (yet!) IDA Pro and the Free version doesn't allow to analyse 64bit I needed to resort to something else.

Opening the binary in the tool we can specify the Image Base so let's do that. 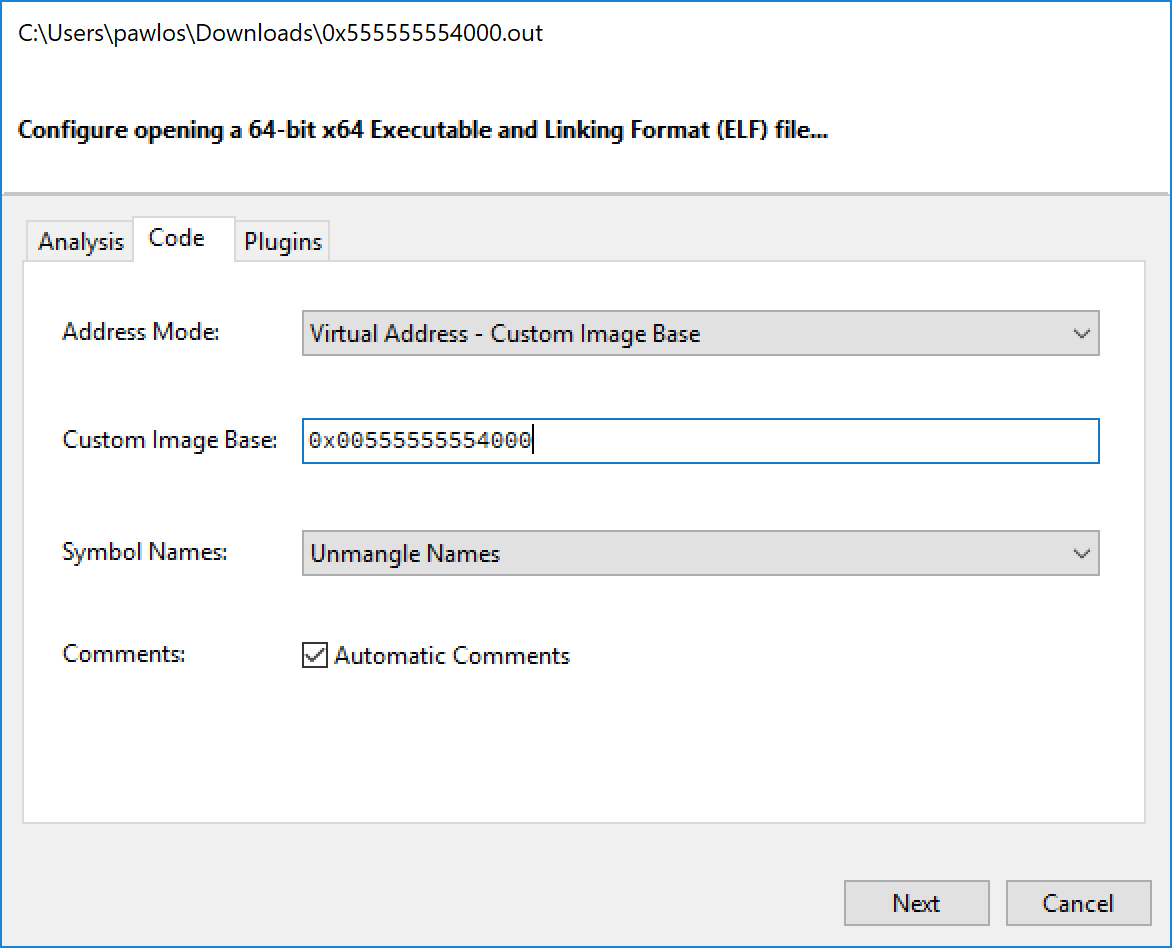 What we see there only the 0s encoded as add byte ptr [rax],al but Relyze only decompiles the code that it can reach and since our binary is not complete it might not decompile it correctly. But checking the binary showed us that there's a lot of non-zero data at the end of the file @ 0x780. Let's go there and see if this is something we can use. Just switch to FLAT and see what's there.

At that offset there's some code but 0x10 bytes father we see only dup. Let's press C to convert it to code. Magic happened & we get something that looks like some actual code. 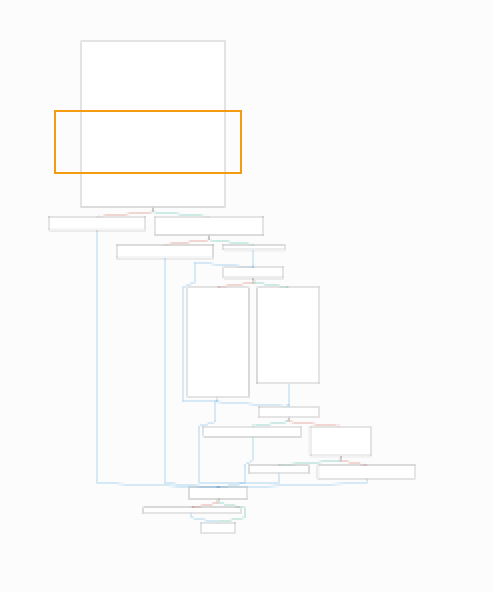 Even though we see the code we still miss the imports and parts of the methods. But maybe we can use a bit of deduction.

If we check carefully we can spot lines like that in there:

We can't use the data to reconstruct the file (non-printable characters are represented with .) but we can extract some info. If we copy enough data (at least 2854 bytes) to a new file and check the 2854 offset we get... a NOPE. So it looks like we pass a string here and then call some function - we can safely assume that function is printf. By the same deduction process we can quickly found out where we print NOPE in few more places as well as YUP. Clearly we are in the right place. We also discovered scanf, strlen and usage of stack canary.

Analyzing the function a bit more we discover this piece of code: 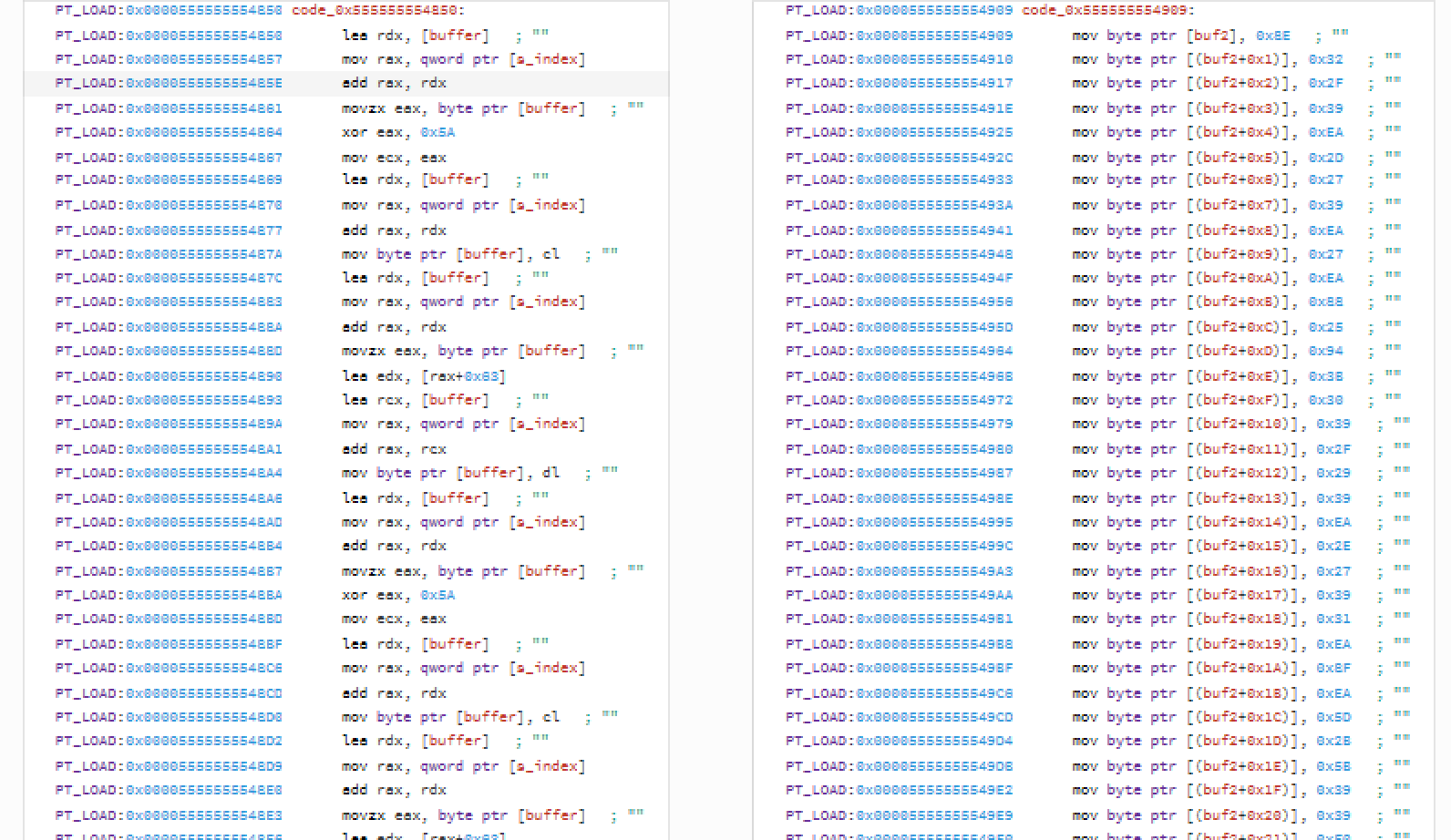 The part on left looks like encryption and the one on the right something we should end up with after the encryption that we will compare to.

Focusing first on the algo first. It doesn't look complex - on the first look it looks like there are some unused instructions that we could get rid of and if we follow the asm it boils down to this.

Okey - we know the algo. Let's try to reverse it on first two chars.

Running a quick in python reveals that it might be actually working! We got a Th.

This was a FoREnsics task I guess.

Yup. It was. Thanks Gynvael for a great task!