Last week there were two CTFs I've participated in.

Qiwi-Infosec CTF-2016 & RC3 CTF 2016 were both quite an interesting. The first one, due to being during the week, I couldn't give as much hours as I could. In the second one I gave much more time & energy but it was worth it.

I have a snake. CrackMe!.

The file was a python compiled bytes. By using uncompyle2 I was able to recover the .py file

By adding import dis and changing exec code to print dis.dis(code) we are able to obtain the Python byte code.

As I can see the code is not that complex. After few minutes we can get the original python code:

But the system did not accept this as I correct one. WTF? I was staring a bit at my analysis for another 30 minutes after I've realized that maybe I should provide only the part in the {} and yup. After removing flag:{ and} the system did accept the flag.

In this CTF I've started with some trivia tasks. I like those as they can give some easy points (that's not the main reason for liking them) but also can set yourself into challenges.

So in this CTF I've started with solving Trivias (one wasn't that trivial at all ;))

This virus, once clicked, will send itself to everyone in the user’s mailing list and overwrite files with itself making the computer unbootable.

Well there are lots of viruses that can do that but I was looking for some most know ones.

Finally found out this most famous worm - ILOVEYOU. At first I discard this one as a valid solution as it was worm not a virus but the more I read about it I was more and more convinced. An finally this sentence

A Trojan horse that infects Windows computers, usually performing a man in the browser attack, key logging, and form grabbing

Ok, checking all the most known trojans I found out Zeus and this sentence from the description confirms the flag:

This one did not require even a second of searching. Who hasn't heard of Stuxnet.

This proposed law suggested giving the United States government more power over infringing content. Websites like Reddit were up in arms over this as they thought this would give the government too much power.

At the beginning I thought this was going to be ACTA but that didn't work. I found out this article about reddit but SOPA and PROTECT IP did not work either. I went on reading about those acts (omg!) and found out that PROTECT IP is also known as PIPA (good name ;) and that was the correct flag.

You’re trying to see the cute dog pictures on ctf.rc3.club. But every time you click on one of them, it brings you to a bad gateway.
https://ctf.rc3.club:3000/
-- Your friendly neighborhood webadmin

When opening the page you see a lot of Doge images. 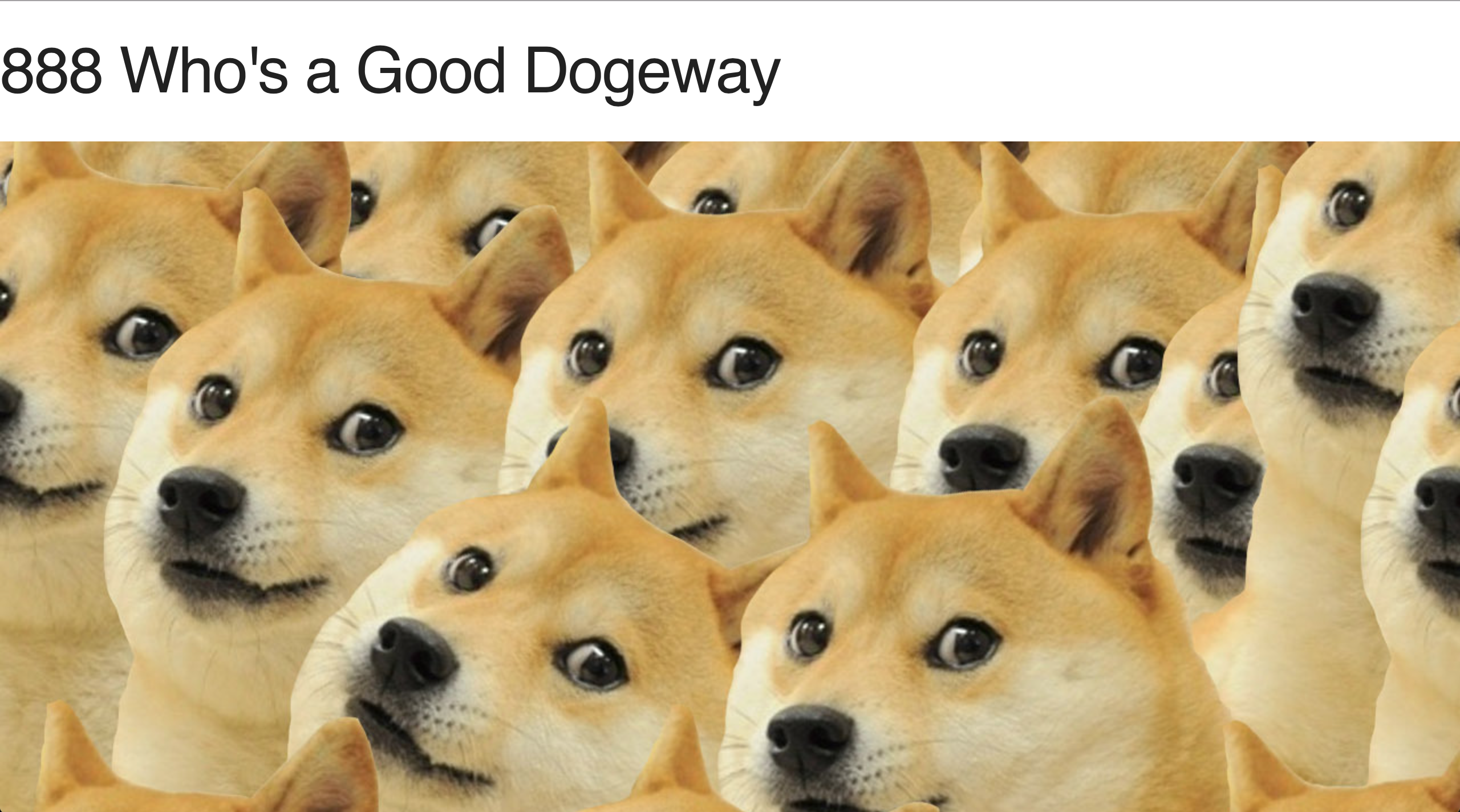 There's not much on the webpage itself or the headers but there's a CSS file link with the page. By getting it's content one can see at the very end the flag:

The 3D Design students have been boasting about how they can trade sensitive information without anyone ever knowing. You’ve intercepted one of their USB’s and found this interesting file. Figure out what the hell is going on.
Download Link: https://drive.google.com/file/d/0Bw7N3lAmY5PCTWg5YU1uNUk3cmc/view?usp=sharing
-Your friendly neighborhood httpster

So I've downloaded Blender and import it. And actually it worked. One could see a nice dinosaur (Stegosaurus) inside.

but we can also see there's are other elements on the scene. 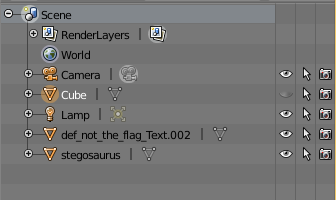 after hiding the stegosaurus object we see this:

We just received this transmission from our news correspondents. We need to find out what they are telling us.
Download Link: https://drive.google.com/file/d/0B_AQp5s_S-khWjExSllLYjFRR0E/view?usp=sharing
author:orkulus

After downloading the file we can see there are bunch of zip files in the tar archive. And in each zip file there's a txt file with part of the text transmission that gives this message

Coming to you live from QuarfBlaaaark 7, this is Montgomery Flaaaargendach with Live Forensic Files: Raw Forensic Adventures.
Hello folks. Today we're going to take a trip on the wild side. We're going to try to figure out what happened to our favorite ducky superstar from QuarfBlaaaark 6.
That's right folks, Fluffles McSchloobdeboop has gone missing. She was last seen in entering a limousine at a night club.
Her father has ties to the Queebloid mafia family, which controls a majority of the traffic of a drug called quaaaack.
That's right folks, the crazy party drug named after the extended hallucinations that have caused people, just like yourselves, to start quacking uncontrollably.
We have reason to suspect that the Bleegle mafia family, which is vying for control of that drug market after the decline in the public use of moooooooooo, may be seeking to hold Fluffles McSchloobdeboop for ransom.
Let's go and find her. 3 hours of watching Montgomery Flaaaargendach drive around town screaming "FLUFFLES!!!!" later
I think that we may have found their hideout. Let's go Jimmy.
As you can see right now, we have found the Bleegle mafia boss sitting in a chair. He doesn't look that happy.
Oh, his hands are tied? Wait, is that Fluffles? No, it can't be.
Fluffles has taken the head of the Bleegle family hostage, not the other way around.
It appears that this was an elaborate ruse played by the Queebloid mafia family to let Fluffles be captured and then hold the head of the Bleegle family for ransom.
Wow, these Queebloid folks do not fool around.
Oh, what's this? It seems that this has erupted in an all out gang war!!!!
*From off camera, Jimmy says: "Monty, no it's not. There's nobody named Fluffles McSchloobdeboop. That's a preposterous name.
Jimmy continues: And, you know what Monty? I've had enough of following you around with this thing. I'm tired of recording whatever you want me to.
I can't do this any more. Go back to your fantasy world now, because I'm going home.
*Montgomery slowly picks up the camera that Jimmy left on the ground. He looks deep into its lens.
It appears that the conspiracy runs deeper than I thought.
Cut to black

for a short wile I was searching for something hidden here but gave that up very quickly. And I've started looking at .tar & .zip files. By hex dumping the whole archive I've noticed something that can't be unrecognized.

base64! So after careful analysis of the file I've extracted 5 base64 strings

which decoded to: RC3-2016-DUKYFBLS. For a while I did not checked it as a flag but finally gave it a try and it was actually the flag.

Whilst fighting of hordes of Deadites, Ash seems to have forgotten something. Help Ash remember the words, because he'd rather be in Jacksonville.
nc ctf.rc3.club 6050
author:orkulus

After connecting to the services we are flooded with base64 strings and the connection is closed.

so first I've decoded them

it looks like some quotes from a movie. My searching for some of them in your favorite search engine it was obvious that they come from two zombie movies:

Ok, so maybe the flag is coded as binary depending of the movie? Let's try it out.

There was some back and forth with few of the quotes but due to the fact that I knew the first chars of the flag (RC-2016-) I could verify the correctness of quotes assignment to the movies. After making it correct and running we get the flag: