A nice question was posted on Reverse Engineering at Stack Exchange and since it was a an interesting one I've decided to give a bit of lengthy description here (apart from my answer there).

The question can be found here and the OP asks about a bit different things there.

It all started with OP wrongly indetifing it as a C# CrackMe. The first look at code like this, and if you had any experience with Managed C++, it was obvious that it was Managed C++. But I was surprised that it could be checked with dnSpy so it got my attention.

After initial infestigation from the question & provided screenshots I could not figure out more, but thankfuly a binary was provided. Now I can explore.

And in fact it is a Managed C++/.NET solution. The first interesting fact is that was where to look for Main it wasn't found in som obvious locations like Program class. 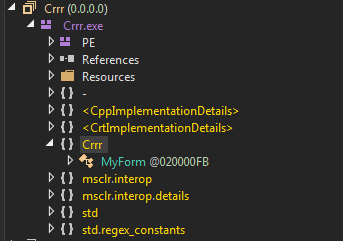 But searching for it reveils that namespace - is packed with types and one of them, named <Module> has our Main in it. Methods names that are interested to us where mentioned by the OP so we could focus on them, but my eye was caught by all those other methods that <Module> was full of.

If you inspect this method w/o any filtering then I must admit it's horrible.

but if a bit of unmangling is done, it's quite understandable piece of code. Firstly, this basic_string<char,std::char_traits<char>,std::allocator<char>\u0020> it's just a C++ way of wrting std::string so let's do it manually. Also this \u0020 is this ' '. So let's changed that too. Now it looks much more readable - all we did is replace. Ok, that's not enteirly true - on line 4 I've added a 1 to string so the original line was string string; and I've changed it to be string string1; (also were it was used too).

I did the analysis of this method on the picture, but now you can easily see that copy content from textBoxes into a native memory and continue working on them. This is what makes this a bit more harder then usuall .net assemblies.

Even though we can see that on line 14 & 17 we check if string1 contains '@' (64) and '.' (46). So we assume that string1 contains our entered e-mail - also the name of one of the variables - email indicates that this might be the case. The it's moved around few times and we ended up on line 32 were we pass md and email to the method Check(). Let's focus on it now.

Also here it looks awful but after the same tricks as before it's bearable.

Now it's clear. We generate a string and pass it through MD5 and in the end we compare it with, what we've entered.

As I've mentioned before the difficulty here is that we don't see real value of variable, and we see addresses instead. but is this an issues at all? In the end it has to access the value so even if they are not visible at first we will get to them eventually - for example when we compare the results on line 71. If we get into that method we can easily spot values: 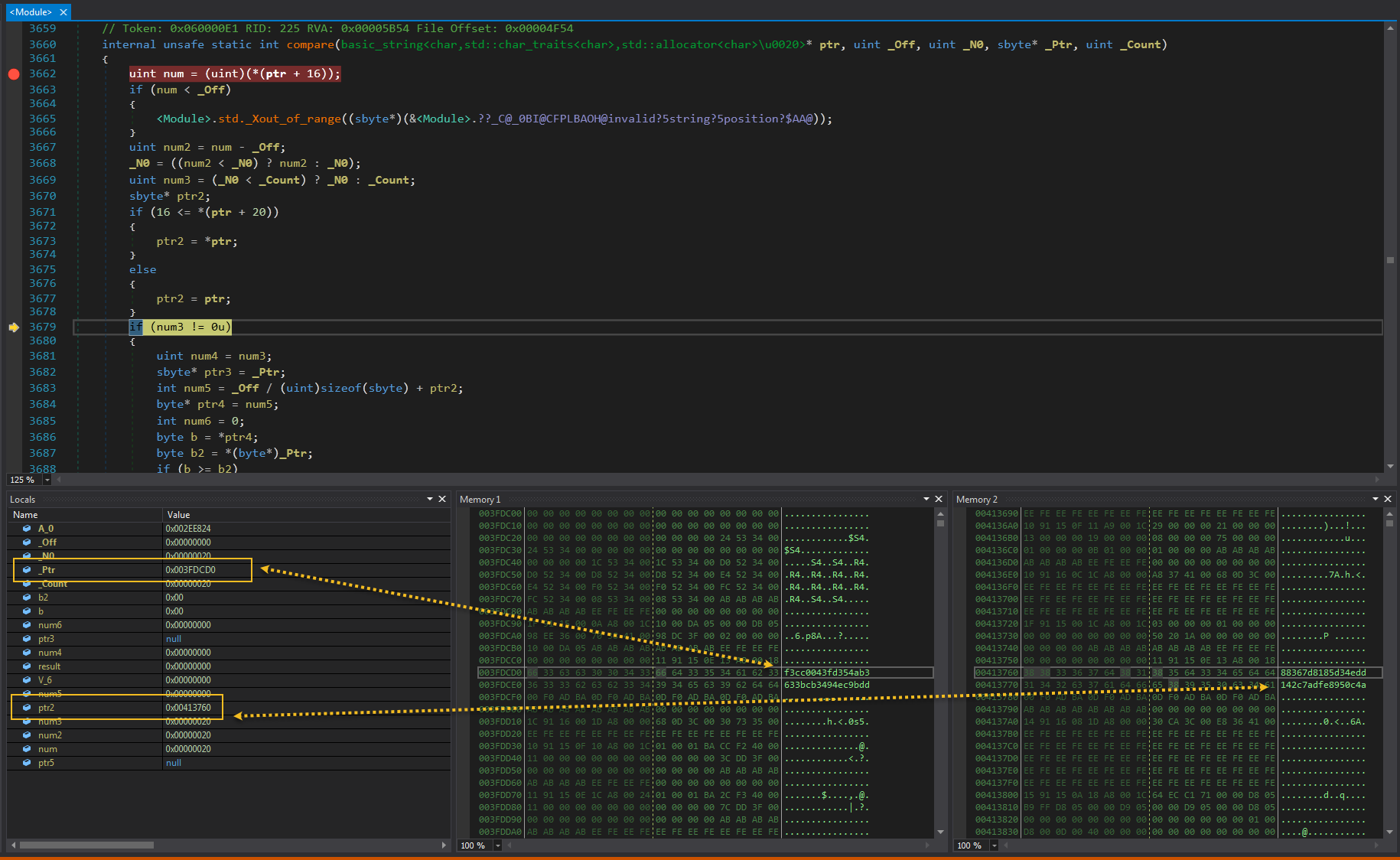 It was obvious that they have to be somewhere in the memory, maybe it was a bit hard to get to them as I had to press CTRL+G on the Memory window and type the address but nontheless it was doable.

The other thing is how the CrackMe calculates the value. It looks like there's some degree of randomness in it. But that's another entry...